The Vertere DG-1 Dynamic Groove Record Player is Vertere’s most affordable design; the easiest to set up and use, and also contains some of their most innovative thinking. 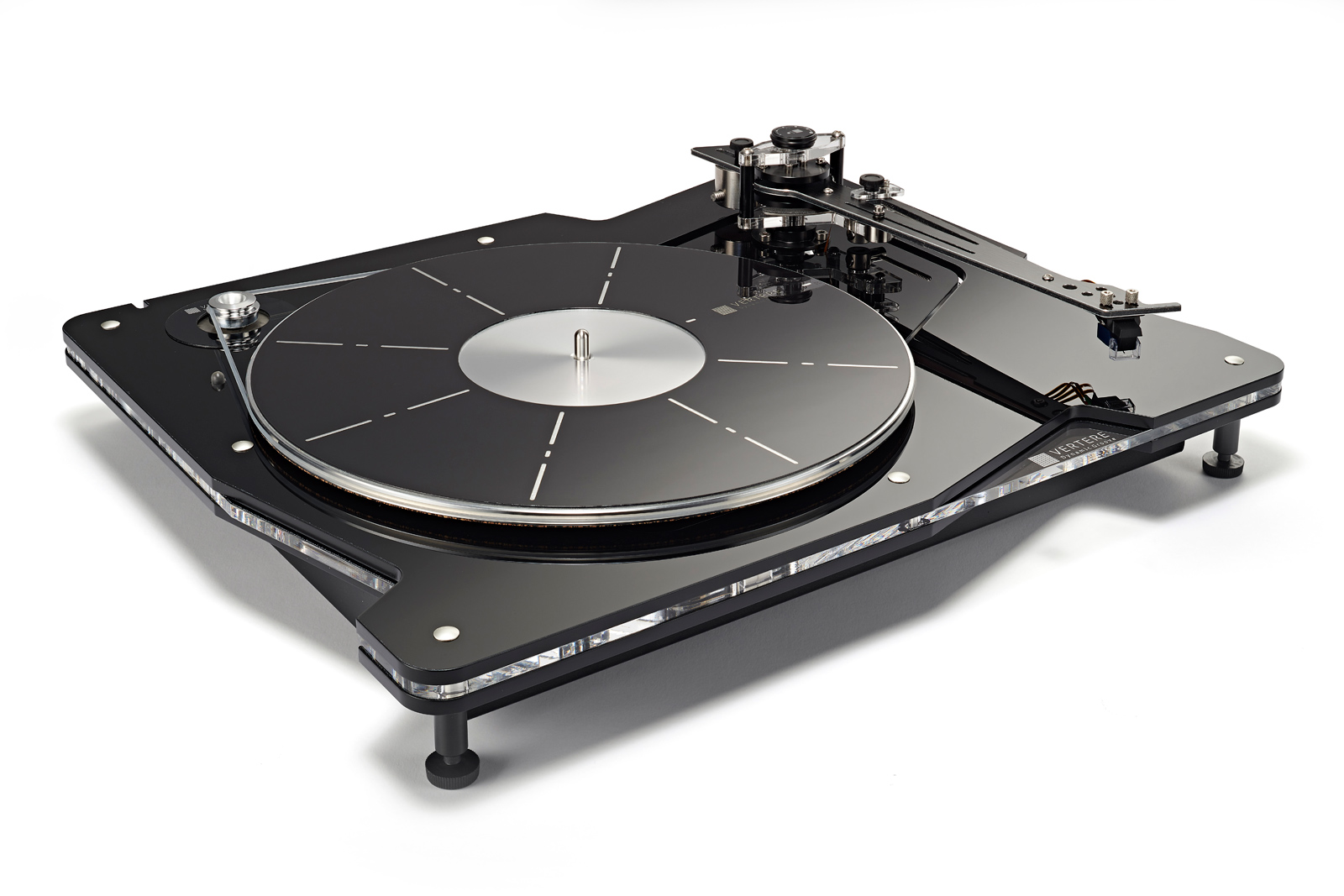 For those daunted by the idea of setting up a record player, many of which seem to arrive in kit form, the DG-1 is as close as you’re going to get to ‘plug and play’ in a high-end, high-performance record player, and yet packed with innovations.

The DG-1 is their simplest record player, yet also their most highly-developed.

Here’s why… When it came to building a new, easy-to-use, entry-level model for Vertere’s record player range, they could have taken the easy route of simply replicating much of what they have already done in their flagship models, just using less expensive materials and components.

But that would have been too easy and rather unsatisfactory – after all, they are all about designing to a level of performance, not a price.

So a complete re-imagining was the only approach to take.

In case you thought the motor’s only job was to make sure the record rotates at the right speed, think again: as the only source of energy for the signal generated by the cartridge and fed out to the amplifier, it’s arguably the most important part of any record player.

The DG-1’s 24-pole Precision Synchronous motor is individually tuned to minimise noise, uses an offboard power supply, and is controlled by circuitry derived from that developed for the flagship RG-1 Reference Motor Drive.

For the DG-1, the advanced electrics have been designed down to a single microprocessor PCB, which is both addressable for precision setting during manufacture and programmable for future upgrades. Copper/stainless steel shielding protects it from unwanted interference.

Drive to the platter is via a precision machined aluminium alloy pulley on the motor and a bespoke silicon rubber drive belt for smoothness and durability, while electronic speed change, via a switch to the rear of the plinth top-plate, adds to the ease of use and removes any need for belt-handling.

Like the pulley, the platter itself is also precision-machined alloy, to the top of which is bonded a PETG record interface mat.

On the underside a cork/Neoprene/nitrile bonded disc controls platter resonance.

The platter rotates on a highly polished stainless steel spindle, which rides in a main bearing housing using a super precision tungsten carbide ball, avoiding the need for complex regimes of lubrication, while still retaining the smoothness of rotation essential for the accurate playback of records.

That’s another example of the many ways in which the elements of this record player have been simplified to optimise performance.

The DG-1 tonearm is uniquely Vertere, and differs from established thinking in its use of a flat profile – one of the most striking visual elements of the whole record player – in place of the usual tube.

Conventional arms use tubes for stiffness, but these bring all kinds of problems with resonances, and thus need damping if they’re not to ‘ring’, and pass those distortions back to the cartridge.

The DG-1’s three-layer, non-resonant tonearm beam avoids these problems and, in place of conventional tonearm cabling, uses a flexible PCB sandwiched into the arm itself to carry signal from the cartridge to the output terminals.

It’s a one-piece design, running continuously from the cartridge connections all the way to the output to the amplifier.

The bearings allowing the arm its horizontal and vertical movement are also innovative: there aren’t any – well, not in the conventional sense!

Many solutions have been sought in the past for these precise bearings, which need to be small, precise and as near-silent as possible, but for the DG-1 they have developed a very simple solution: twisted nylon threads – one for movement in the horizontal plane, and two for the vertical axis.

These threads are simple, exhibiting none of the stiction – or initial resistance to movement – of conventional bearings, as well as being super-light and noiseless.

They’re also self-damping, with just the twist of the thread controlling their movement.

Like the tonearm, the DG-1 plinth is a sandwich construction, using non-resonant cast acrylic to form the main plinth and the sub-plinth for a clean and sophisticated look.

This three-layer design incorporates the control button,the speed indicator and the user-selectable standby mood-lighting, as well as the silicon rubber isolation between the plinth and the platter assembly.

The whole assembly sits on a steel chassis, chosen for optimal stability, housing the motor drive circuit and the motor all supported by three adjustable feet.

The DG-1 comes complete with a non-resonant acrylic dust-cover, where its hinges are integrated into the plinth for a sleek and modern profile.

The development of the DG-1 gave Vertere the perfect opportunity to go back to the fundamentals of playing records, examine every element of the task of a player, and develop innovative solutions to deliver the performance they were seeking without compromising the performance – or the affordability.

The result is a record player that looks very different from their other models, but still succeeds in delivering exceptional performance.

Everything was re-examined, reconsidered and, if necessary, re-engineered, with some unusual solutions from the motor to the plinth, and from the tonearm to the bearings supporting it.

Yes, at first glance the most striking features may be the multi-layered plinth, with its built-in standby mood lighting, and the flat profile tonearm with its apparent lack of wiring, but there’s a lot more going on beneath the skin to squeeze the maximum resolution and musical involvement from the DG-1, making it the best-sounding ‘plug and play’ record player you can buy.

And that ease of use was also a major consideration in the design here: we all know that record-playing systems with hugely adjustable suspension, tonearms and more may deliver satisfactory levels of performance in the right hands, but what they wanted was a model you could just unbox, place and plug in – well, it’s almost that simple – and yet achieve the maximum sound quality of which the design is capable.

Throughout its development the DG-1, like all Vertere record players, has been benchmarked against master tapes and the half-speed-mastered LPs made from them.

They have close friends in the recording, mastering and pressing business, including award-winning engineer Miles Showell and producer Giles Martin, and they draw on their expertise when it comes to the way their products perform.

They know how their recordings should sound, and it’s to that Vertere aspire 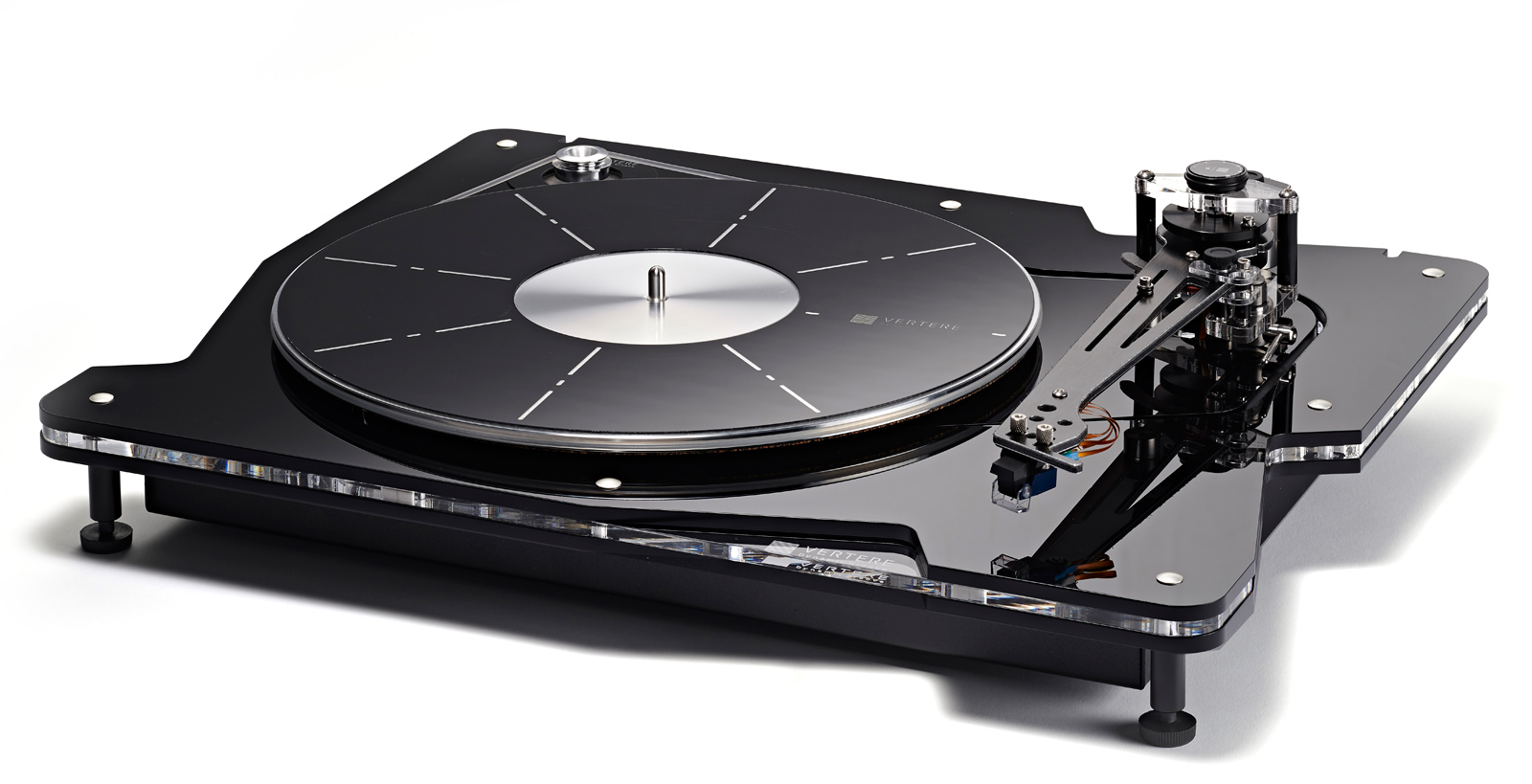