THE BEST SELLING ALBUM EVER gets the ONE STEP treatment! 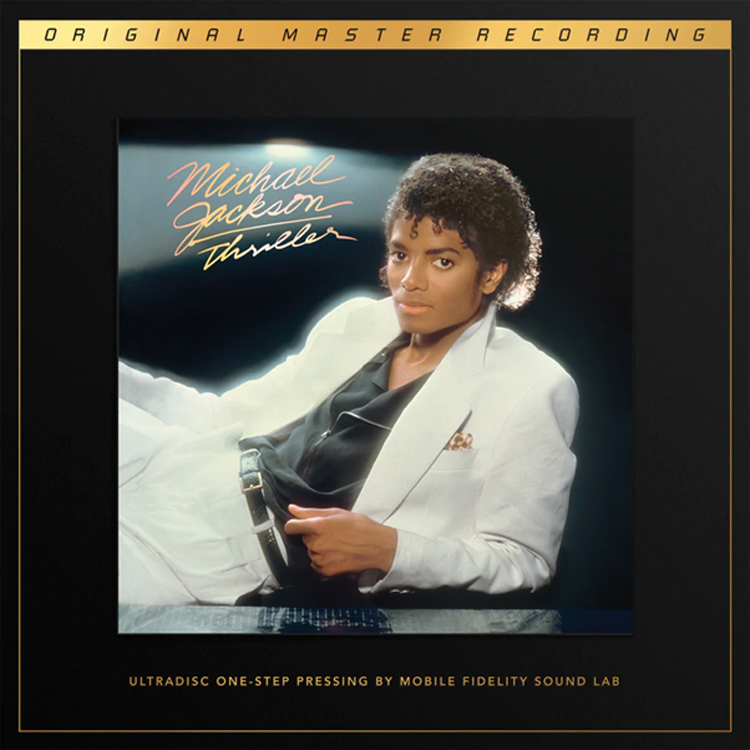 MASTERED FROM THE ORIGINAL ANALOGUE MASTER TAPES FOR SUPERIOR SOUND

Putting into perspective the incalculable impact and pioneering significance of the best-selling album of all time – Michael Jackson’s Thriller – has never been easy.

Though Michael Jackson Thriller lays claim to mind-boggling statistics that serve as reminders of how pervasive and indispensable it remains to music snobs and casual listeners alike, its essence always traces back to the greatness, power, and scope of the music.

Now, as it celebrates its 40th anniversary, the record that reimagined pop; united audiences; made strides towards achieving racial equality; established the video as an artistic and commercial format; and taught the world how to dance sounds even more invigorating than it did during the advent of the Walkman.

Mastered from the original analog master tapes, pressed at RTI, and limited to 40,000 numbered copies, Mobile Fidelity’s UltraDisc One-Step 180g 33RPM LP set does for Thriller what Jackson’s unforgettable appearance on the “Motown 25” TV special in 1983 did for his career:

It makes the music personal, human, desirable, relatable, imaginative – the definition of cool.

Michael Jackson Thriller extraordinary reissue does so by presenting the songs in lifelike fashion, zeroing in on the fundamentals with laser focus, and magnifying the brilliance of the production, arrangements, and vocals in ways that let everyone experience Thriller as if hearing the album for the first time.

Surpassing the sonics of earlier reissues and pressings, Mobile Fidelity’s 180g LP set strips away prior limitations and provides a clear, dynamic view of a landmark that crashed through every conceivable barrier and permanently transformed music, culture, and society.

The expanse and depth of the soundstage, range of detail, percussive textures, air around the vocals, and natural decay of notes come through with demonstration-grade realism.

The gorgeous packaging of the Thriller UD1S pressing befits the album’s select status. Housed in an open-ended slipcase, the set features a special foil-stamped jacket and faithful-to-the-original graphics that illuminate the splendor of the recording.

Aurally and visually, this reissue exists as a curatorial artifact meant to be preserved and examined. It is made for discerning listeners that prize sound quality and production, and who desire to fully immerse themselves in everything involved with the album.

Given that no album released during the past four decades even approaches the magnitude of Thriller, everything about it remains important.

Numbers – even the “40” tied to its anniversary – don’t even tell half the story.

The 1982 blockbuster has sold more than 34 million copies in the U.S.; globally, it has moved upwards of 70 million units. Thriller dominated the 1984 Grammy Awards, winning a record-breaking eight trophies and sweeping every major category.

It repeated the feat at the American Music Awards. Seven of its nine songs were released as singles; each charted in the Top 10.

Perhaps most astonishingly, Thriller topped the Top 200 Albums chart for 37 weeks during a 59-week stretch. Fast forward 24 years, and the album was the biggest-selling catalog title of 2008.

Included in both the Library of Congress’ National Recording Registry and the Grammy Hall of Fame, Thriller was ranked by the Rock and Roll Hall of Fame at No. 3 on its Definitive 200 Albums of All Time. Rolling Stone named it the 12th Greatest Album of All Time. TIME deemed it “the greatest pop album of all time.” The Independent called it “the most inspiring album of all time.”

Thriller proved as influential as it did inspiring. Its unparalleled success, dazzling style, and sleek architecture changed every facet of culture and entertainment. The reverberations echoed throughout society.

Thriller crossed over to mainstream channels and white audiences with a degree that no Black musician managed in decades (if ever); prompted MTV to give Black artists a widespread platform; elevated choreography and dance to higher-level artforms; shattered long-standing racial boundaries; and reconceptualised music via a genre- and color-blind blend of fleet pop, funk, disco, soul, and rock sent up with cinematic panache, oversized ambition, and dynamic energy.

Its effect on multitudes of subsequent artists cannot be overstated.

Thriller opened up a new galaxy in which Prince soon strolled.

It’s the same universe that Usher, Maxwell, and Jamiroquai joined in the ‘90s and that contemporary headliners like Beyonce, Justin Timberlake, and Bruno Mars orbit today.

Their style-blurring identities, R&B-rooted foundations, and interdisciplinary approaches directly link to those on Thriller. Notably, the album’s first single – “The Girl Is Mine,” a duet and co-write with Beatles legend Paul McCartney – captured the record’s unwillingness to cater to a specific race, generation, class, or style. Eddie Van Halen – at the time, the world’s premier rock guitarist – performed a similar bridge role by supplying the electrifying solo on “Beat It.”

Jackson, Quincy Jones, and company do the rest.

Drop the needle on any track on Thriller and the insatiable desire to move takes hold.

So do sensations of familiarity, pleasure, fun, and soulfulness.

Be it the breathless, bass-laden swagger of the Moonwalking “Billie Jean”; horn-accented, post-disco slide of the gossip critique “Wanna Be Startin’ Somethin'”; rousing tempo of the lush, sequin-adorned “P. Y. T. (Pretty Young Thing)”; gentle balladry and liquid vocal phrasing of “Human Nature”; vivid hybrid of funk-disco and horror-film drama of the title track; or streetwise strut and rhythmic fantasia of “Beat It,” Thriller never lets up. 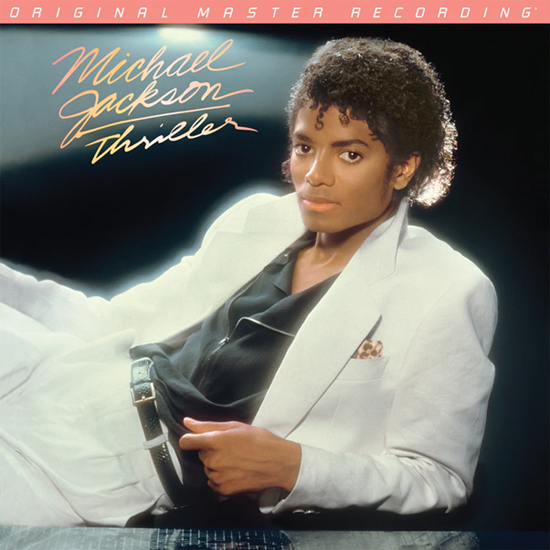 Surpassing the sonics of earlier reissues and pressings, this hybrid SACD strips away prior limitations and provides a clear, dynamic view of a landmark that crashed through every conceivable barrier and permanently transformed music, culture, and society.

The expanse and depth of the soundstage, range of detail, percussive textures, air around the vocals, and natural decay of notes come through with demonstration-grade realism. Put simply, this reissue makes the phenomenon that is Thriller eternal.

Mobile Fidelity Sound Lab has been the undisputed pioneer and leader in audiophile recordings since the company’s inception in 1977.

Throughout its history, Mobile Fidelity has remained true to this goal, pioneering state-of-the-art technologies and setting audiophile standards that remain in place today.

In response to rapid advancements in both recording formats and audio delivery systems over the past several years, Mobile Fidelity has maintained its ongoing commitment to improving industry standards.

To this day the independently owned firm continues its commitment to exceeding industry standards.

We use cookies on our website to give you the most relevant experience by remembering your preferences and repeat visits. By clicking “Accept All”, you consent to the use of ALL the cookies. However, you may visit "Cookie Settings" to provide a controlled consent.
Cookie SettingsAccept All
Manage consent

This website uses cookies to improve your experience while you navigate through the website. Out of these cookies, the cookies that are categorized as necessary are stored on your browser as they are essential for the working of basic functionalities of the website. We also use third-party cookies that help us analyze and understand how you use this website. These cookies will be stored in your browser only with your consent. You also have the option to opt-out of these cookies. But opting out of some of these cookies may have an effect on your browsing experience.
Necessary Always Enabled
Necessary cookies are absolutely essential for the website to function properly. This category only includes cookies that ensures basic functionalities and security features of the website. These cookies do not store any personal information.
Non-necessary
Any cookies that may not be particularly necessary for the website to function and is used specifically to collect user personal data via analytics, ads, other embedded contents are termed as non-necessary cookies. It is mandatory to procure user consent prior to running these cookies on your website.
SAVE & ACCEPT